Rating:
The Wild Adventures to be had with the Amazon Wild Slot
For players that are looking for a slot that has a quality of beauty to it, Amazon Wild might be the slot game that they have been looking for. This game features five reels and 100 pay lines and comes straight from Ash Gaming. Players that play this game will immediately notice that is a game that was created by professionals to be a representation of a real-life tour of the Amazon. This game makes use of 3D graphics that are of very high-quality and the creators did a fantastic job at making everything in the game look very real, vibrant and full of colour. This slot is full of surprises for players, featuring wilds, multiple opportunities for bonuses and it is entirely compatible with both Mac and Windows operating systems. Sorry fans of Linux!

This game does live up to the name it was given, having symbols such as the Panther, Lizard, Monkey, Wild Flowers, Chameleon and many different types of Birds. The game uses the Gold Head symbol to represent the wild in the game, to create winning combinations using the symbol to replace all of the symbols that have been placed onto the reels, except of course for the Map, which is used as a bonus symbol. 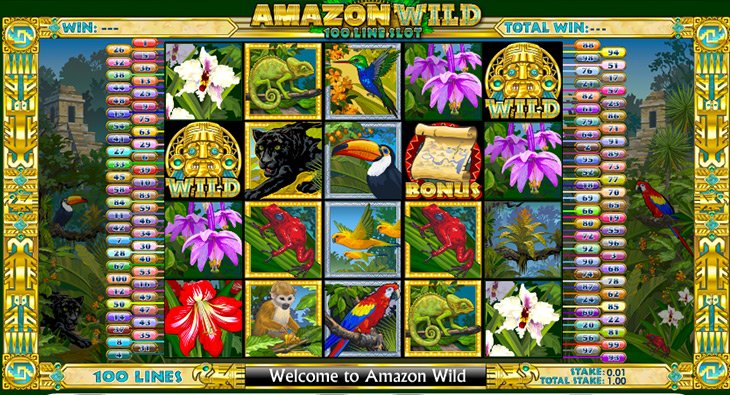 Players will find that in the background of the game there are many different sounds that play, including those of a wide assortment of animals and birds. The game’s reels are put into place ontop of what looks to be an ancient fortress that has come from the medieval times, and the creators also made it so that the forest is full of golden colours, to show the wealth of the forest to the players. Players will also be able to notice that there is writing of a language that is ancient shown on the far ends of the reels, and this helps to create a feeling of intrigue and fun in players.

Like many other slot games that have played a role in the casino world, the Amazon Wild slot game comes equipped with a button for autoplay. Players will be able to push this button to create up to 25 spins that will be automatically initiated. Players that have wins that happen during the times of the automatic spins will have their funds immediately put into their account.

The theme of this fun game does a great job of making a large mixture of the symbolism that was found in the Aztec era. The Aztec symbols that are used during this game play an important role, because they are used to help players with the triggering of the bonus feature. The Map round can be triggered by players during the time that they have Map scatters that are showing up on the reels at any location 3, 4 or 5 times.

During the time that the Map round is triggered, the players will be pulled over to a second screen that will have a map showing them the Aztec ruins. The players will then have to pick an amount of ruins for the prizes to be shown. Every one of the ruins comes equipped with a prize that is different. Some ruins that a player can choose depends on the amount of scatters that the player was able to trigger during that bonus feature.

The coin values that are used during the game can go between 0.01 and 1.00, and players will also be presented with a max bet per spin that equals out to 100. The pay lines of this game are fixed. However, players will notice that they are always able to change the coin values to be better suited to the amount of money they wish to spend. This game has been said by many different players to be very straightforward and easy to figure out. The games that are bonus are very easy to land on for players, and the players will not have a need for any degree that is in archaeology for them to be able to dig up the treasure that has been long lost. The stakes that players will have during this game will be easily able to be seen, being that they are located at the bottom of the screen, and having 100 pay lines, players will be able to have many chances to win this fun game.