Rating:
The Mysterious Bermuda Triangle Slot
It is a pretty well-known fact that there are a lot of mysteries in this world that no one has even come close to figuring out yet. One of the most famous mysteries that has gone unsolved is the one that everyone knows of, the Bermuda Triangle. There are many of times that there has been news of wild storms and also news of very odd happenings that take place within this strange part of the world. These happenings all having to do with random things, such as boats, planes and many other things that just vanish without even leaving so much as a cookie crumb.

There have been many people who have tried to figure out the why behind these disappearances and other strange occurrences at this place, and none of them has been able to come up with any explanation behind any of it. Now, there is a slot game based on this weird place on this planet, and this new slot game takes the mystery of this mysterious location and spins it in a new direction, and the creators of this game are calling it, that’s right, the Bermuda Triangle slot game. However, many players are curious as to if this game is an adventure worth trying, or if it is just another slot gone wrong. 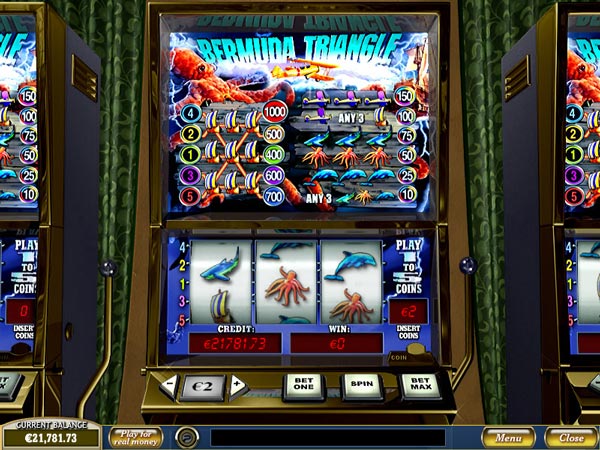 This slot game is one example of a slot that was done greatly, and with fantastic design as well. The first thing that players will probably notice with this game is that gives off the vibe of one of the older casino slots, giving it a beautiful and relaxed feel to it. The reels of this game are set in the centre of the screen, so as to make sure that the player’s attention is focused where it needs to be. Along the right side of the reels in the game is some information that players can use as a guide for their game play.

The symbols that are used within this game are representations of the creatures that lurk within the deep blue sea. Meaning that during the time players are making the reels in the game spin, there will be many dolphins, sharks, octopus and even the well-known Amelia Earhart biplane falling from out of nowhere right in front of the players.

Even though this game is very easy to play, that does not mean that it is a basic game. This game has three reels and five lines, which is likely to give to players a different from the usual sum of winning opportunities when it comes to paying lines. Players that push the spin button will notice that there is a sound effect that is played and it sounds like a submarine that is making use of their sonar. This is a fascinating way that the creators were able to add to the theme of this Bermuda Triangle slot game.

This game can easily be described by many players as being one of the most entertaining slot games in the casino world. However, that is up to each player to decide. This classically designed game has features that are very similar to the games of old, and still comes equipped with the newer advancements, making it a very fun game to play. The style that the creators of this game chose to go with is beautifully worn and is very extravagant. With three reels and five pay lines, this game can reassure players that they will have many different ways to win from a spin of the reel that is very simple. When it comes to slot games, there is a lot of things that a player comes to expect these days, which is why it can be hard for a game to come into play and make a good impact. The Bermuda Triangle slot game surpasses all expectations and has been highly rated by many players, making it a game worth trying out.