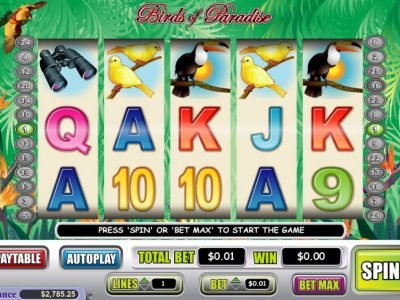 Rating:
Playing in The Sun With Birds Paradise Slot
Birds Paradise is a game that is sort of new to the world of slots. This game, however, was made for those that are lovers of birds. This game comes with graphics of the avian type that do seem just to go flying off of the reels. This five reel, 25 pay line game has many fans already giving it fantastic reviews. Even though the players that have played this game are falling in love with it, there are still those who are questioning as to if a game based on birds could be fun. However, based on the facts and reviews, there is only one conclusion to come to, this game is one of a kind and can capture every slot lover’s attention.

This game, of course, has a theme that is of the tropical variety and has the symbols to go with it. The symbols of this game include birds, nests, binoculars and letters from the alphabet that everyone has agreed look like they are made using tropical bamboo. Of course, with the tropical/bird theme, it makes sense that the creators would have background music that is the most relaxing music anyone has ever heard, which does help with game play. As far as themes go, this theme probably has shocked more than a few players, however, the overall appeal of it is the relaxing feeling that the player gets.

When looking to the potential the game has for betting, players can see clearly that the game can bring in a lot of cash. With a jackpot maximum that reaches 10,000 coins, the game has a lot of potentials. Players can place a bet between 1 and 25 coins, which are worth between $0.01 and $5 per coin to players. The wide range of betting options make this game a great pick for those that love penny slots and also those that are into the higher stakes games, thanks to the game makers making the betting range be between 1 penny and $125. A player can be awarded the 10,000 coin payout just by making a line that has a total of five symbols that are Wild Orange Build. If players are looking for the next highest payout, because the Wild Orange Build one is to obtain hard, they can go for the scatter symbol, which offers players with the second highest pay in the game.

If a player were to want to break down the symbols, to give a better account of what is going on in the game, they would see that Birds Paradise offers players with ten options, with payouts that are ranging from 5 coins to 10,000. Of course, the game comes with symbols that are of the playing card type, which is traditional after all, an Ace, 9, 10, King, Queen and Jack. Players will see that these symbols are currently split up into three different pay brackets, with the 10 and the 9 equaling out the same pay, the Queen and Jack equaling out to the same pay and the Ace and the King equaling out to the same pay.

However, a player should remember that even though one symbol might have the pay as being the same, it does not mean that a player can replace on a symbol for another symbol. This means that the player would still have to make a line of three of the symbols from left or from the right to win unless that player can get a wild symbol, which would make them able to create a combination.

Birds Paradise also comes packed with scatter symbols that are represented by a nest that is full of eggs. If a player gets the scatter symbol, it equates to them not having to line them up to win a prize. All that has to happen is the player would have to have two or more of the scatters appearing at any place on the screen to win. If a player does manage to obtain three or more of the scatters, then they will be automatically taken to the free spin bonus round. Of course, this is just a bonus on top of being able to get the payout that initially would have come with obtaining that. The bonus free spins that the player would get would use the same amount of pay lines and also would use the same bet that was used at the time that they were activated.