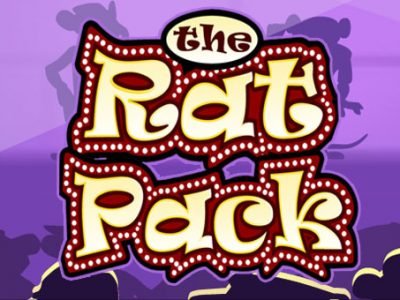 Rating:
The Interesting Game of The Rat Pack Slot
Okay, so this slot machine might seem to have a little bit of an odd theme to some. However, how many games are out there that are based on rats? However, for players that have a funny bone in them or love for 1960s razzmatazz, this game that was created by Microgaming will probably be a huge hit. Players that decide to play this game should be prepared to come face to face with some pretty swish ratty characters, all of them being based on the original Rat Pack coming from the 60s.

The graphics of this game are understandably cartoon based, to match the theme of the game, which happens to be a funny one, and there also happens to be some interesting background jazz and swing that do a lot to add some glitz and glam to the game. Players who go with this game will be able to win up to 30,000 credits just by making the five reels of the 30 pay line game go round and round. For those that are lucky enough to have won the jackpot in this game, there will be many chances to add some glitz and glam to their lives.

Like many other slot machine games, which were created by the team at Microgaming, The Rat Pack is a very easy and simple game to catch on to for players. Some might even say that is so easy that a rodent could play it. Though there may be an enormous amount of pays in this game, some might even find it overwhelming; there is a lot of help to be found in the help pages of the game which were certainly added with player’s interest at heart. Players are also able to find out how much every one of the symbols is valued at just by pushing on them during the times that they show up on the reels. 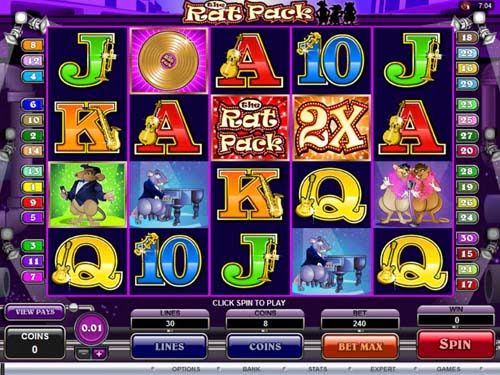 Players should note that there are only three things that they will be required to mess with so as to make changes to the amount they are setting for a bet that they wish to stake. The first thing that they should do is think about how many of the 30 pay lines they want the came to have in play. Players can make this number go down or up just by pushing the buttons that are located below the lines option, which are labelled with a + sign and a – sign. After this, players can pick from the number of coins that they wish to have on every line that is active. This will require the player to mess with the buttons that are located below the coins option. Finally, a player will be able to pick the coin size that they wish to have for betting, just by messing with the buttons that are conveniently placed by the purple coin emblem that is is the left bottom of the player’s screen during the game.

Yes, players will find that setting up this slot game is as easy as all of that. Meaning that a player can just mess around with the controls and then start playing. This game is great when it comes to amounts players can place bets, going from as low as 0.01 all the way up to 75.00 for every spin.

This game comes equipped with some pretty impressive symbols, and also comes with some cool characters. The symbol that is getting the most recognition for right now by players is the cymbal image that is used to represent the scatter symbol during the game. If a player is lucky enough to have this symbol show up on their reels three or more times, it will activate the bonus free spins. The bonus free spins round is played a little different from what everyone knows slot games to do for their normal treatments of this feature. The reason that this is true for players is that during the time of the extra spins, players will notice that the scatter cymbal will count toward increasing the cash flow that players get.

While this game might not fall along the common guidelines for games, the graphics and bonuses and cool features give this game the extra kick to make it a fun game for all. This game is especially great for those that are in love with funny slot games making it a hit among many players.